Bad iPhone repairs from other Leeds based repair centers!

It has come recently to our attention that other Leeds based repair centers are cutting vital corners when repairing iPhone’s. The attached picture shows a iPhone which has been attempted to be repaired by another Leeds based repair center (Which we will not name here, but I’m sure they know who they are) They are offering LCD/Digitiser repairs at a fraction of the price of the competition.

The attached picture shows an iPhone that has been repaired for cheap by a rival repair center, for the picture it is missing its EMI Shields which protect the iPhones other compontents from Electromagnetic interference caused by the iPhone when making and recieving calls. Also what is not clear is that there were also several other key components missing which were present before the repair was carried out.

iPhones are expensive electronic devices and sometimes a cheap repair may seem better than one that costs more.  Why risk geting your phone back with some of its components missing for a cheap repair?

The iPhone below ended up costing the customer twice as much to replace the components that were taken out when the LCD/Digitser was changed by this un named repair center.

Here at Gadgets Fix we pride ourselfs in our workmanship and guarantee that no iPhone will leave with missing parts etc. 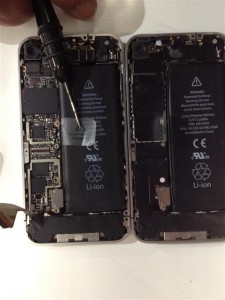